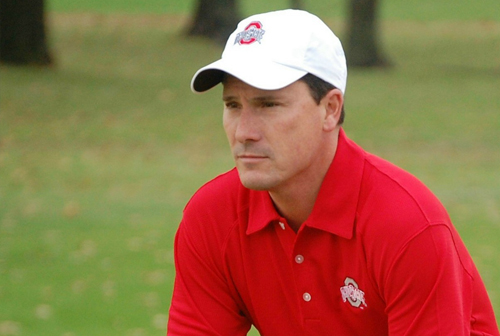 He has coached numerous All-America golfers on both the men’s and women’s side and has coached two National Players of the Year, instructed one NCAA Division III Champion and coached the player who holds the all time record score of 60 at the NCAA Men’s Championship Finals.

During his time in the college ranks, Coach Sparling was known as a tireless worker, outstanding recruiter and teacher; someone always focused on helping his players reach their academic and athletic potential. His ability as a teacher, player, leader and mentor helped his players and teams achieve success both in the classroom and on the golf course.

Now, through Play Golf In College, Coach Sparling looks to take his knowledge and life experiences and help his clients navigate the college placement process and prepare for success in college and in life. ‘Making a difference in the lives of others’ is his motto.

While at Ohio State, Coach Sparling helped coach the Buckeye golf program back to national prominence. During his first year in Ohio, the Buckeyes qualified for the NCAA Championship for the first time in four years and two players made the All Big Ten team. His second and final year at Ohio State resulted in two team wins, four individual victories and the Buckeyes qualified for the NCAA Championship finals for the first time in 11 years, where they finished 25th at Inverness. The season was the best in over a decade for the Buckeye golf program. One player was named All-American and the team recorded the best academic performance in the history of the program with nine team members making the Ohio State Honor Roll. Coach Sparling also brought in one of the best recruiting classes in over 10 years to the Columbus, Ohio, campus.

In Sparling’s three seasons at Duke, the men’s team was one of only three teams in the nation to make the final cut at the national championships those three years. Four men’s golfers earned All-America honors and Ryan Blaum was a two-time ACC Player of the Year. In addition, while leading the Blue Devils in his last year at Duke, the team recorded the best academic performance in the history of the program with 8 team members making the ACC Honor Roll.

While in charge of all recruiting for the Duke men’s team, Sparling signed two of the top classes in the country. In 2006, the class was ranked No. 4 nationally and the incoming 2007 class was No. 2.

Sparling played golf at Guilford College in Greensboro, N.C., where he graduated with a degree in economics. He and his wife, Suzie,live in Dublin, Ohio, with their three children: Jack, Nicholas and Emma.